What does a ticket from Auckland to Tokyo have to do with "Real Options" and how can 10 Minutes investment in an option save several hundred Dollar? A little while ago (roughly 9 month) I promised to come back on my experiences from missing a bus in the "middle" of the desert in Dubai.
So, here it is.

"Real Options" – or real options, as I will mostly call them for the remainder of this piece – is a popular concept inside the ideas behind different models for organizing the work of knowledge workers, namely in the agile and lean communities. So what't the difference between real options and normal options?

How I understood real options

From what I understood about real options in the beginning the idea revolves around three basic concepts.

Options have a value (and a price)

So while you may see a value in an option like "(or a specific trip) I can choose between train and plane at the same price" there is a price to be paid to even have that option. (In this case it may be possible to get both plane and train tickets at a very low rate if you book a ling time in advance, but there might be cancellation fees that are applicable as soon as you cancel a ticket - so basically the price of the option "both kinds of transportation" is that of one of the cancellation fees.)

Options expire (or can be released)

If you hold an option at some point in time it becomes an obligation. Consider a tentatively held appointment of the "let's meet on monday or tuesday night"-style. If you collect enough of these appointments you probably will run into a huge overhead of coordinating open options if there is no way to cancel them. As explained in the talk by Chris Matts and Olav Maassen (see below) each option also implies a commitment in a way. So it becomes important to be able to release options if you don't want to over-commit by keeping options open.

The first part of that rule comes quite naturally to me, because of my natural tendency to decide as late as possible (a dangerous tendency that I share with a huge part of humankind as explained by Dan Ariely in his book "Predictably Irrational") - but the second part makes it really something that I am willing to put active effort in. Especially, and that is what Dan Ariely talks about in his book, if the cost of keeping the options open is higher than the (perceived) value of the options.

How real options are explained in "the community"

but actually after listening to the complete talks I realized that the parts I put in parenthesis in my understanding where present – the where just not printed out. I guess in their book Commitment - A novel on managing project risk on Sponsume Chris Matts and Olav Maassen will actually go into all these details.

Where did real options hit me?
Last year I retrained some of my development skills while traveling the world - completely on my own whim, so I should have had all the options I could have wished for. As I learned in Dubai that was not quite true, but the full applicability of the real options model – and the price I had to pay in hindsight for keeping my options open – hit me when I tried to jump on a plane from Charlotte, USA via San Francisco, USA to Auckland, New Zealand.
Since I had no one to answer to I thought it would be possible to just fly when and where ever I wanted - as long as I was equipped with the right visa. Little did I know about New Zealand's policy on that. Although citizens of the EU are eligible for a visa-on-embarkation there is a subtle twist. The organization who brings a person into the country is responsible for their departure after the visa expires. Which means that Air New Zealand required an onward ticket upon embarkation to the Air New Zealand plane.

I only realized that when the boarding staff in my layover airport (San Francisco) announced that all non Air New Zealand ticket where subject to exchange now. "Now" in this case being 40 Minutes prior to the scheduled "doors closing" time. Did I mention that I thought I had "all the options I could wish for"? Suddenly my Options decreased and became very exactly priced. I could either buy a (refundable) onwards ticket to Australia, or plan my onwards trip on the spot. Given the fact that I had a really, really slow internet connection I wasted about 30 minutes searching for an onward flight to Tokyo. Which I found. At a high price, but without having to buy the way more expensive refundable ticket to Australia. Why would I do that? Because buying the ticket to Australia - even though it was refundable - would have taken another huge bite off the monthly limit of my credit card - which I would have to use to get the ticket to Tokyo anyway in that month.

Back to real options: the investment of ten minutes on the same afternoon while I still had a decent internet connection to book a refundable ticket to Tokyo would have kept my options open - at a price but since I didn't invest that time the price for the option "go anywhere I like after New Zealand" changed from $0 to roughly $1000 inside 30 minutes - but still had an intangible (but subjectively high) value for me. So inside 40 Minutes I experienced the value of options, the price, the fact that they expire and that you have to act early to keep them open and enable yourself to push the decision to a late point in time.

From my point of view it is inevitable to take the parts in parenthesis into account - only if you take those aspects into consideration the options become real to me.

Thanks a lot to Yves Hanoulle for the pointers!

posted by Michael Mahlberg at 20:38 No comments:
Labels: agile, lean
Email ThisBlogThis!Share to TwitterShare to FacebookShare to Pinterest

The "Last Responsible Moment" may be sooner than you think

Funny when you start to compare software development with the real life. (After all: That's what object orientation is all about, right? Modelling the real word with software representations? But let's take that at another time and come back to the subject at hand.
While I literary roamed the world in 2011 the concept of planning with regard to the "Last Responsible Moment" made the rounds on some of the mailing lists concerned with agile software development practices.
I on the other hand tried to live a 'normal life'. writing software and preparing material during the daytime, while spending the evenings with everyday pasttimes - in my case Aikido. Never mind if you have never heard of Aikido - although you might want to look it up at Wikipedia. 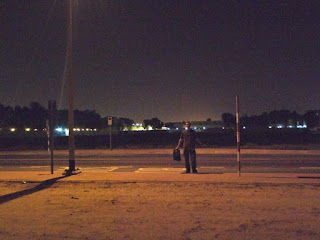 The question in case is the one of the latest responsible moment - in this case the moment for the decision on whether to hitch a ride with one of my fellow aikidoka, take a cab or take the bus.

To cut a long story short - in the real world the latest responsible moment is not when you reach a bus stop a couple of miles of the central public transport axis of dubai, shortly after your last training buddy has left.
Especially if the area temporarily has no cell phone reception and that particular bus stop is only serviced until half an hour earlier at this time of the year (mentioned in the small print)

posted by Michael Mahlberg at 16:47 No comments:
Labels: agile, lean, methods
Email ThisBlogThis!Share to TwitterShare to FacebookShare to Pinterest