In the early stages of the introduction of Kanban systems many organizations struggle with the implementation of the pull signal and how the cards represent the pull signal.
In my experience a lot of this confusion is caused by semantic diffusion and the fact that “The Kanban Method” (for software development and other knowledge-work) often gets over-simplified and is reduced to a lax translation of the word kanban and the original 3 rules for a Kanban (capital K) system.

Let’s look a bit deeper into this
As David Anderson points out in his famous blue book the word kanban means (more or less) «signal card» and such a card is used to visualize a so called pull request in a traditional kanban environment.

Now there is a lot of information put into one little sentence. What is a traditional kanban system anyway? What is a pull request? And what’s different in our Kanban (capital K) systems?

A “traditional” kanban system is the kind of kanban system that has been in use at the production plants of Toyota and the like to optimize the flow of physical work products through the factory. Here the upstream station – that is, any station that lies before another station in the value stream – gives out kanbans which represent their capacity. These kanbans act as tokens for the downstream stations to request new material – or, to pull the material.

But what is different in “our” Kanban systems? Well, the reaon for the capital K is the fact that we’re working with a different kind of representation in “The Kanban Method” (for software development and other knowledge-work). On page 13 of the aforementioned book David points out that

«… these cards do not actually function as signals to pull more work. Instead, they represent work items. Hence the term ‘virtual’» (emphasis mine)

So what about the pull signal in this scenario? Isn’t it all about establishing a pull system? Well, it’s covered in work. Literally. Almost. But at least it can be covered by work as the following illustration shows.

A very simple board 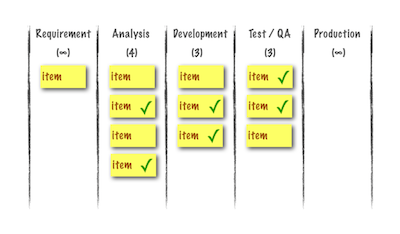 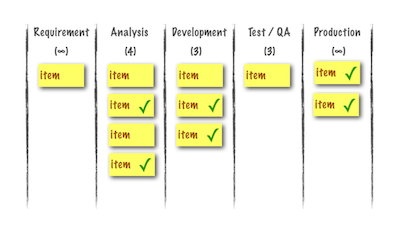 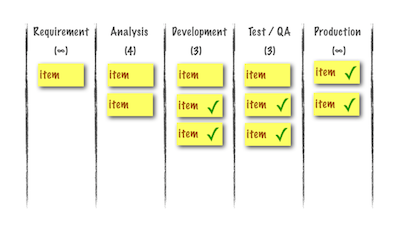 As you can see: you can’t see any pull signal - only the work.

That’s because the pull-signal is actually hidden behind the work and not really visible. At least not in this rendition. It is possible to make it visible, but only for very simple boards. All that’s needed here is a little annotation.

A very simple board with annotation 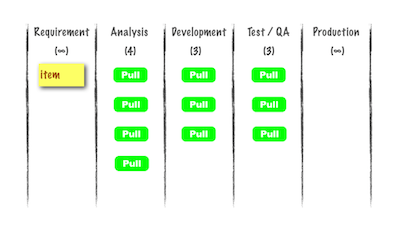 A kanban board annotated with pull signals…

Board filled with work 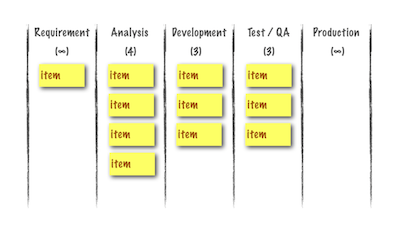 The same Kanban board in use – all the pull signals hidden by the work. Looks quite similar to the non-annotated board, doesn’t it?

Some work moved into production 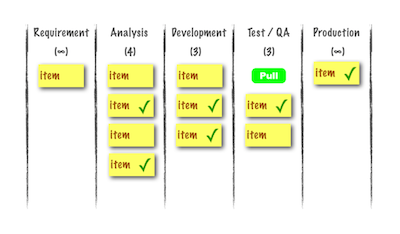 So now, when the cards are moved, the pull-requests become real visual signs.

Work getting pulled all over the board 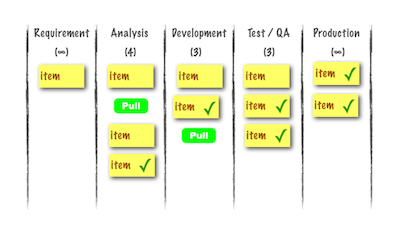 And when the pull-request are fulfilled, that in turn reveals more pull requests and so on.

A more complex board

Actually most evolved Kanban board contain at least some queue-colums - often differentiating between “doing” and “done.” Now the annotation approach doesn’t work any more because the pull signal becomes completely virtual.

Let’s have a look at this as well.

The same work on a more elaborate board 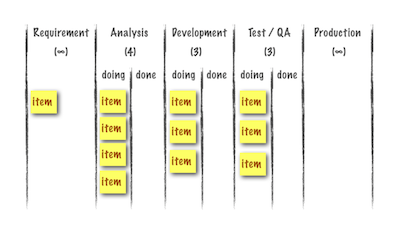 Work in progess shows up in the doing colums of course

Some work is done 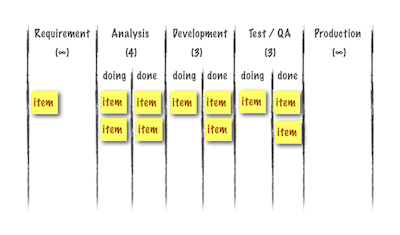 Even though some cards are moved around, no WIP-Limits are broken and no pull request issued (WIP-Limits in this example go accros doing and done) 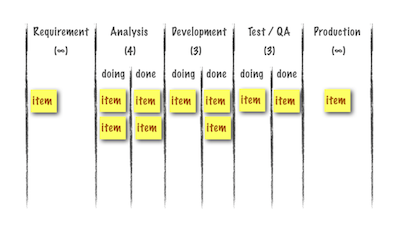 Now that a work-item has left its WIP-boundaries a pull request is implied - but not at all visible. 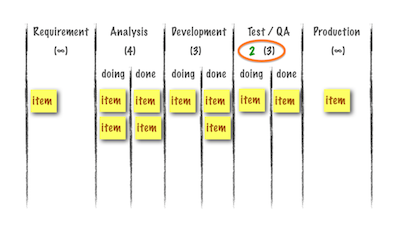 In fact the pull-request is only ‘visible’ by comparing the actual Work-In-Progress – in this case 2 – with the WIP-Limit, which is (3) in this example. Hence the pull request can be calculated but is not visible to the naked eye. Which fits in nicely with the notion of a “virtually signalled pull request”. This can be translated to “virtual kanban”. And of course virtual kanbans live on ”virtual kanban boards” in “virtual kanban systems”.

Don't be too SMART - Goals, Targets and Lighthouses

The idea of SMART goals has such appeal to many people, that they try to put everything in these terms. And I have to admit that I'm a big fan of the SMART concept myself.

Having goals that are:

is very helpful when I try to decide whether to start a certain task or not. Whenever I hold an operations review or a retrospective I remind people to think about the SMART acronym whenever they they refer to actions.

As an example from the software development world “We should clean up our code” is not a very SMART goal if you look at it. “We want to reduce the function size of every function to less than twenty five lines by applying ‘extract method’ until next month” may not speak very well to the non-initiated, but it surely is SMART.

Sometimes I may overshoot in this quest for clarity. Not all goals have to be perfectly SMART. Especially with long term goals it is sometimes a good idea to aim for a “goal” that is not really reachable but that can show the way nonetheless. Some goals are targets that you want to hit, for some goals you want to pass between the goalposts (or over the finish-line for that matter).

Some goals really should be treated more like lighthouses by fishermen. You want to move towards them when it's appropriate but you can never reach them and probably don't even know their specifics – but they still help you find your way. (Besides: when your in a seagoing vessel and do reach them bad things happen, but that may be pushing the analogy to far)

So the picture in my mind has changed over the years and nowadays I try to use the SMART concept whenever I deem it appropriate, but I also try to find enough lighthouses on the way.

posted by Michael Mahlberg at 17:10 No comments: Links to this post
Labels: goal, methods, philosphy, targets
Email ThisBlogThis!Share to TwitterShare to FacebookShare to Pinterest