What change initiatives can learn from steam engines 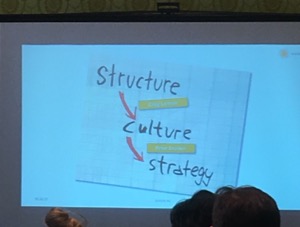 [I once saw this on a slide at a conference – I'd love to give due cerdit,
but I can't find the original source. The conference was “Tools 4 Agile
Teams” 2017, but I can't identify the session in this picture]

That sounds catchy, but actually there also is quite a bit of a story behind it.

The second part originates from the almost famous quote “Culture eats strategy for breakfast" that is often used to explain why so many strategically motivated changes just dry up at the department or team level.

The first part comes from what Craig Largman calls “Larman's Laws of Organizational Behavior” in which #5 reads "Culture follows structure" and implies that culture itself can not be changed directly but only by changing the structure.

Whether these statements are true is hard to decide – neither of them claims to have any hard scientific evidence. I, for one, certainly have seen more than one case where these observations not only held true, but were also helpful to keep in mind.

A great example on the domination of structure over the other aspects comes from a blog-post on the time when steam engines started to be replaced by electric motors. At that point in time, steam-engine powered factories had widely replaced individual workshops and the usual layout of the shop floor was optimized to make the best possible use of the power provided –via mechanical shafts– by the steam-engine.
Along came electric motors, which –theoretically– offered a huge benefit in efficiency and effectivity. But when factories shifted to electric motors nothing much changed initially. Simply replacing the gears, shafts and belts of the steam engine didn't really enable more efficiency or effectivity.
Only when the factories started to change the fundamental way they worked did the electrification make a difference. Once the newfound flexibility was leveraged and the shop floor layouts were rearranged to follow the flow of production work, a steep increase in both effectivity and efficiency became apparent.

Kind of how agile approaches to product development enable business agility, but need to be leveraged to really make a difference.

P.S.: I haven't yet read the book on “Building the Agile Business“ that Peter Abraham and Neil Perkin wrote (simply because I didn't find the time to read it yet) but I do love at least one of the points they make in their above mentioned blog post. So by now the book is definitely on my "to read" list.